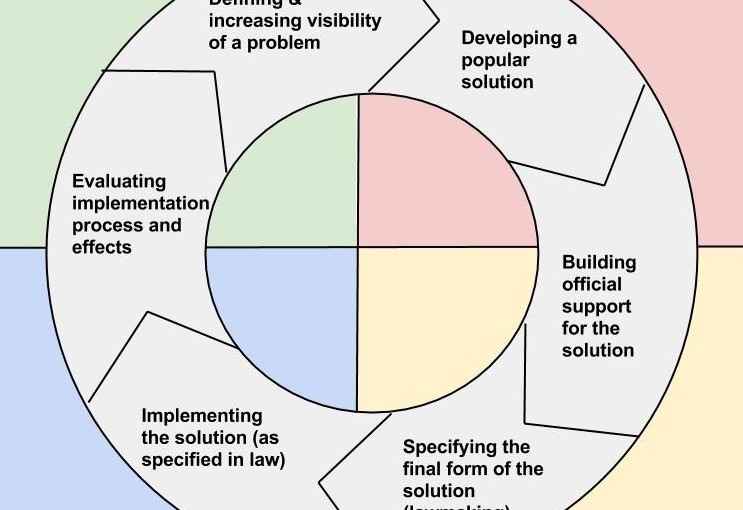 BRAIN FOOD: Sunlight's Emily Shaw dug into why she stopped worrying and started loving politics. If you're interested in what we do and what all of us do together, it's worth reading the whole thing. [READ MORE]

"No matter what size the government you’re working with, the democratic policymaking process follows the same basic structure. People who teach political science, public administration or public policy call it the policy cycle, and represent it as a circle, because making and implementing policy tends to be an ongoing and iterative process. A problem might help lead to the adoption of one kind of policy, but then the implementation of that policy creates new problems, and then observations of those problems leads to the creation of further policy.

There are a number of versions of the policy cycle out in circulation. I developed a version that uses language which is a little less tied to the assumption that policymaking occurs just within government. As open government advocates know, people outside government can – and do – play an important role in nearly all of the aspects of the policymaking and implementation process."

ON TO THE DNC: Sunlighters Louis Serino, Libby Watson and Melissa Yeager have headed up to Philadelphia for the Democratic National Convention. As with the Republican National Convention, the authors of Political Party Time are blogging, using Storify, and tweeting at @libbycwatson, @melissayeagr, @SFPartyTime or the hashtag #SFinPHL.

Editor's Note: As in past years, we've added a campaign section to the newsletter to reflect the increased volume of news and analysis about the upcoming election in the United States. As always, please send us links, research and interesting data. -Alex